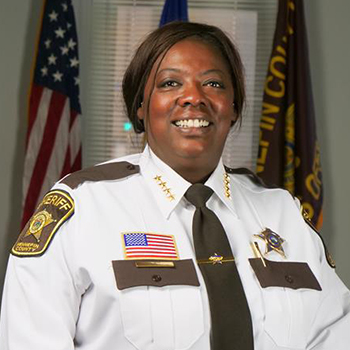 Dawanna S. Witt was elected as the Hennepin County Sheriff on November 8, 2022. She was sworn in and took office on Tuesday, January 3, 2023. She is the first woman and person of color to hold the office.

Born in Chicago and raised in Minneapolis, Sheriff Witt became a mother at 15 but nevertheless excelled at school. She earned several scholarships to college, including the Justice Alan Page Scholarship. As a condition of that scholarship, she volunteered in several community organizations in various roles and saw firsthand how her actions could make a positive difference in the lives of young people. Her passion for working with kids remains to this day.

In college, Sheriff Witt studied chemical dependency and family therapy and her first jobs were in the nonprofit field. When she heard that the Hennepin County Sheriff's Office was looking for female detention deputies, specifically women of color, she decided to apply, and was hired in 1999. Working as a detention deputy opened her eyes to the people and possibilities in law enforcement.

In 2004, after returning to school to become a licensed peace officer, Sheriff Witt was hired by the Dakota County Sheriff's Office. During her career at Dakota County, she worked in a variety of roles, including bailiff, transport, school resource officer, detective, crisis negotiator, recruitment coordinator, diversity and inclusion coordinator, and more. Ultimately, she became the first woman in the agency’s history to reach the rank of captain. Through it all, she focused on reaching out to young people and communities that have historically had poor relationships with the police. During her time as a school resource officer, working with children with mental health and behavioral difficulties, the school experienced a noticeable drop in kids entering the juvenile justice system.

While working at Dakota County, Sheriff Witt earned a police science degree, and followed that up with dual master's degrees in public safety administration and management, which included an internship with the Northamptonshire Police in the UK.

Sheriff Witt returned to the Hennepin County Sheriff’s Office in September 2019 to take charge of the agency’s largest bureau, Adult Detention and Court Services. In her role as a major, she oversaw court security for two of the most high-profile trials in modern history. She also dealt successfully with the pandemic in Minnesota’s largest jail, leading the development of new protocols to help limit institutional and community spread of COVID-19.

In 2022, Hennepin County voters overwhelming selected her to be the next Hennepin County Sheriff. She campaigned on her years of experience and a platform of safer communities, improved law enforcement recruitment and retention, reform, collaboration, and transparency.

Sheriff Witt is married with two adult daughters and two grandchildren. She also works as an adjunct professor at Inver Hills Community College, teaching Juvenile Justice and American Corrections. She serves seasonally as a Minnesota State Fair Police Officer and has served on advisory panels including the State of Minnesota Legislative Task Force on Child Protection and the State of Minnesota Task Force on Law Enforcement Education Reform.